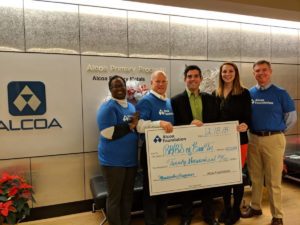 BBBS-ETN currently partners with nearly 40 public schools throughout East Tennessee, including Knox and Blount counties. The partnership with Alcoa Foundation will allow BBBS-ETN to collaborate with additional middle schools and to support a number of enhancements for existing site-based mentoring pairs.

“We are honored to receive this grant from Alcoa Foundation,” said BBBS-ETN CEO Brent Waugh. “Not only will the award help our agency serve more children, it will allow us to increase the length of current site-based matches, resulting in stronger outcomes for the youth we serve.”

BBBS-ETN aims to reach 5% more children in its site-based program through its partnership with Alcoa Foundation. The organization also plans to increase its site-based mentoring match length by 25% to 25 months.

Alcoa Foundation’s support will defend the potential of nearly 400 of the most diverse, at-risk children in the area, including:

“Alcoa Foundation is committed to partnering with communities to address local needs in a sustainable manner,” said Jeffrey Jost. “Alongside Big Brothers Big Sisters and numerous other nonprofit partners, we support environmental excellence, economic success and social responsibility around the globe and right here in East Tennessee.”

The attached photos was taken at a check presentation on Dec. 18.

About Big Brothers Big Sisters of East Tennessee
Big Brothers Big Sisters of East Tennessee defends potential in children through strong and enduring, professionally supported one‐to‐one relationships that change lives for the better, forever. Children enrolled in the program achieve measurable outcomes, including educational success, avoidance of risky behaviors, higher aspirations, greater confidence, and better relationships. This mission has been the cornerstone of the organization’s 47-year history in the Knoxville area. Learn more at tennesseebig.org.