Nearly 1,000 East Tennesseans come together to raise more than $125,000 in support of Big Brothers Big Sisters of East Tennessee

The funds raised through the event will allow BBBS-ETN to match more than 125 children with a Big Brother or a Big Sister in the next year.

“Bowl for Kids’ Sake is more than a fundraising event—it’s a celebration of the phenomenal support our community provides to Big Brothers Big Sisters of East Tennessee,” said BBBS-ETN CEO Brent Waugh. “Participants not only bowl, they learn about our mission and celebrate the friendships that their fundraising makes possible.” 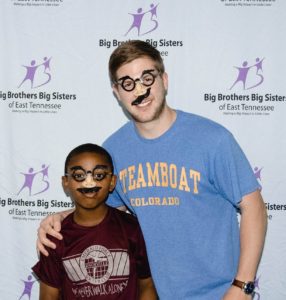 Big Brother Peter and Little Brother Amari were matched during Bowl for Kids’ Sake and attended the event as their first activity. Peter became a Big Brother because he wanted to give back to his community and help children in need. Amari, who is being raised by his mother, wanted a mentor so he could have another male to talk to and hang out with. The two were matched because both Peter and Amari enjoy being active and spending time outdoors.

Peter and Amari are just one of the many matches that will be made this year through funds raised at Bowl For Kids’ Sake.

Special thanks to the Bowl for Kids’ Sake platinum-level sponsors: Pilot Flying J, First Bank and Clayton Homes. For a full list of sponsors, visit BowlForKidsToday.org.

About Big Brothers Big Sisters of East Tennessee (BBBS-ETN)
Big Brothers Big Sisters of East Tennessee has been named a Pinnacle Agency by Big Brothers Big Sisters of America, placing it in the top 10 out of 300 BBBS affiliates nationwide. The agency provides marginalized children with strong and enduring, professionally supported one‐to‐one relationships that change lives for the better, forever. BBBS-ETN ensures that the children in its program achieve measurable outcomes, including educational success, avoidance of risky behaviors, higher aspirations, greater confidence, and better relationships. BBBS-ETN is in its 47th year of serving area youth through mentorship matches. Learn more at tennesseebig.org.
# # #