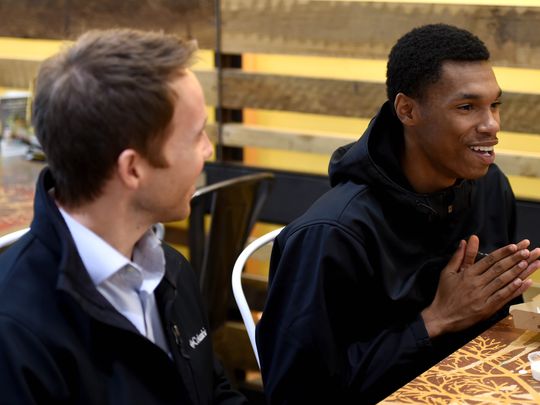 Rich Brown and Kadir Penn may not look like brothers, but there’s no question they are family.

Brown recalled the first time they met at Penn’s grandmother’s house. They immediately had a connection.

“He had just come here (from Atlanta), and they just matched us together,” said Brown, while sitting next to Penn at Whole Foods. “I mean I couldn’t think of a better fit.

“I feel like it’s been really good from the get-go.”

Some staff from Big Brothers Big Sisters were there when they met and went over some ground rules; Brown got to know Penn’s family, and they realized they shared a love of basketball.

“He loves basketball, and that’s something we kind of clicked on right away. I played in high school. I’m a little washed up. I’m not at his skill level, but I can work hard right?” asked Brown.

Penn laughs and shakes his head.

“Those kind of movies, I want to watch them. My wife doesn’t like watching them, so I’m like ‘Perfect. I’ll take him. We can spend some time together and watch movies,'” said Brown.

Brown is teaching Penn about future goals and going to college.

“We do a lot practical stuff too … We just went and got him a coat the other day. He didn’t have a coat, and it’s obviously cold,” said Brown.

Their relationship grew slowly, according to Brown, and during the second year they were paired together, Penn moved back to Atlanta for one school year. The two of them stayed in touch throughout the time apart.

“I remember telling my wife like ‘I want to keep talking to him at the very least because it’s not going to hurt anything. I want to be in his life, and I can still do it,'” said Brown.

“We basically just like kept in touch,” said Penn. “I would tell him what was going on … and when I came up here, we just went back to hanging out like nothing happened.”

Almost five years after meeting, they now talk about subjects both lighthearted and serious.

“The other day when I dropped (Penn) off, we sat in my truck and talked for an hour, a pretty real, stripped-down conversation about everything … We definitely wouldn’t have covered nearly those bases at first, obviously, because those were personal things, but I know him and his family situation deeply. I feel like he knows me,” said Brown.

“He knows my personal situations that my friends don’t even know … (he’s) truly my little brother,” added Brown.

“It’s been really good,” said Penn. “He helped me with school and stuff. He helped me understand some other stuff I wanted to know about, like, certain things, and he helps out.”

“If he needed me –and he’s called me before– late at night on a weekday, weeknight, whenever it is, I’ll be there. I’ll do whatever I can. If some kind of trouble happens, I’m there,” said Brown.

Penn helps Brown when he needs it, too, especially with directions.

Before becoming a Big Brother, Brown helped with the organization’s fundraiser Bowl for Kids’ Sake and said he wanted to serve as a Big Brother because there was a need.

“Just being a part of it that way, I realized there were a bunch of kids on the waiting list, specifically boys, because most guys just don’t volunteer for things. They’d rather sit on their couch and watch football or play video games, so I decided to sign up,” said Brown, who doesn’t have any kids.

He recently won Big Brothers Big Sisters of East Tennessee’s Big Brother of the Year Award at the organization’s holiday party on Nov. 30. The award surprised him.

“There’s never been one time in my life where I’ve been surprised (and) … haven’t had an inclination or felt a feeling of what’s going on,” said Brown. “I was totally (surprised).”

“I thought he knew. I was laughing at him,” said Penn.

During the event, the organization told Brown and Penn’s story, and Penn’s mom spoke about Brown to attendees.

“His mom said some nice things,” said Brown. “(Penn) doesn’t say a lot, but I can see it … it was a good moment to be there with him and his mom. That’s not why you sign up to do something, for an award like that, but it’s nice to know that, you know, the time and the work we’ve put in, whether it’s him at school or me in keeping the relationship whether he’s gone or not … it’s nice to know they reward it.”

“What I’m most proud of is (Penn),” said Brown. “More than any accolades or anything, and I’m going to be incredibly proud when he walks across the stage and graduates, when he gets on a college basketball team because it will happen.”